Did I mention how annoyed I am at the lack of features in the Blogger app? I did? Oh, okay then.
So it's a new year (soon) and I'm thinking about resolutions, specifically doll related. I seem to recall I promised to buy less, make more, and finally do some repaints during 2013. Well, that didn't really... happen, did it? Now, I could just recycle that resolution, but I think that would be a mistake.
Instead, for next year I promise to accept that yes, sometimes I just want to buy pretty things, and yes, it's okay to have a hobby that isn't always about being creative and productive. I think that's probably a healthier approach in the long run. (The trick to a good New Year's resolution is to only promise things you definitely can and want to do. I also promise to occasionally eat pizza and to buy more socks. I did get socks for Christmas, of course, but you can always use more socks.)
I also promise to acually post my doll pics instead of leaving them to gather metaphorical dust on my phone. This blog I found yesterday does their Monster High reviews in pictures only, which I thought was pretty refreshing (of course, that requires knowing how to take good photos!). Here's Dance Class Howleen:
http://nightfirefly.wordpress.com/2013/10/22/monster-high-howleen-wolf-review/
(That's also my excuse for not having any pics in this post: the new year hasn't started yet!)
Posted by Anderson's All-Purpose at 7:35:00 PM 4 comments:

There are so many functions I'm missing in the Blogger app. Not only things like putting things behind a cut, making hyperlinks and centering images, but also having access to settings, stats and subscribed blogs would be nice. Oh well.
Once Upon A Zombie Belle arrived from ebay. She was my chistmas present to myself, just the right mix of cute and creepy. I took pics, of course, but I'm too annoyed with the app to try and embed them! They're on Flickr though, if anyone's interested. Of course, now that I've used up my "doll allowance" for the month suddenly all the toy stores decided to have a sale. I saw a really good price on MH Skelita online, but she'll have to wait. C'mon, I'm supposed to be spending money on other people this month! Too bad no-one I know shares my taste. (Also spotted the first Ever After High dolls online, but the prices were ridiculous. I'm actually holding out for the less elaborate versions anyway, since I prefer my dolls in more realistic clothing and mostly want these for the new bodies.)
Actually, I got a couple more Bratzillaz outfits on sale. Since they fit MH so well I felt like I should stock up while I had the chance. For all the amazing footwear in the MH line, simple black boots are few and far between. Sometimes you just want something that goes with more than one outfit. The high boots even fit Liv and Barbie - or rather, the shafts fit the legs and keep the boots on, even though they're comically oversized. I wasn't sure what to do with the clothes, but they turned out to be a close fit for the Simba Super Models, so nothing will be going to waste here!
The rumors about the Fashionistas (or at least their articulation) disappearing seem  to be true. All I could find when I went to the store was the glitter/jewel/something Fashionistas with the unarticulated torso (something I discovered purely by chance, luckily before I bought one). Bad news, since I still have a bunch of heads to rebody and the Dreamhouse dolls are way too expensive to be donors. They still had the 2-pac fashion designer dolls, though, so all is not yet lost. Once those are gone, it's back to hunting for reasonable international shipping deals on ebay...
Really, though, I can't complain. It's been a good doll month so far. :)
Posted by Anderson's All-Purpose at 12:58:00 AM 5 comments:

Email ThisBlogThis!Share to TwitterShare to FacebookShare to Pinterest
Labels: blogger, bratzillaz, omg shoes, once upon a zombie, ooaz 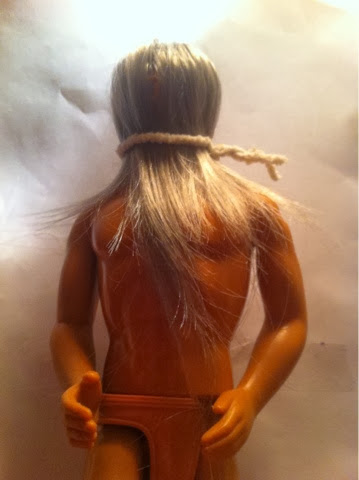 It's going pretty well, actually. As you can see we have reached the Cousin It stage (note elegant pipecleaner garotte, a must-have accessory this spring!).
The tricky part was figuring out how thick to make the plugs. I think I started out too thin, then (after I pulled one and realized it came out) maybe too thick. Some glue would probably be a good idea, but there's a split in the neck and I don't want to risk making it worse. He gets to keep his head on, and I'll just finish this and see how it turns out. There's another doll I need to reroot without removing the head, so I'm happy for a chance to practice.
Rooting with the tool was really quick, a lot faster than I expected. As a beginner it's reassuring to know a mistake won't take hours and hours to fix.
Posted by Anderson's All-Purpose at 12:00:00 AM 4 comments:

Email ThisBlogThis!Share to TwitterShare to FacebookShare to Pinterest
Labels: reroot

Today I:
• put some glue on two floppy elbow joints. Much tighter now, but lots of residue. Will have to tidy them up tomorrow.
• bought a Bratzillas fashion set on sale. Very nice shoes, too big for Simba Super Models but almost perfect for MH! I know someone said they were, but I at least expected the angle to be a bit off. Might have to go back for more.
• Rooted a few plugs with the reroot tool I made yesterday. It's a lot easier than the knot method or needle and thread, which I've tried a little bit. Subject is thrift store Alan with terrible hair, whose head just refused to budge. He only has plug holes on top, so I think he may have had long hair originally. He'a getting short grey hair, although I have no idea how to cut-and-style it to make it look good. Maybe give him a '90s bowl cut like my Generation Girl Blaine? (That would of course mean they're related. Barbie genetics is pretty simple.)
Rerooting will continue tomorrow. Now: bedtime!
Posted by Anderson's All-Purpose at 1:41:00 AM 3 comments:

The Doll Blog Strikes Back (with naked pics of unarticulated Kevin) 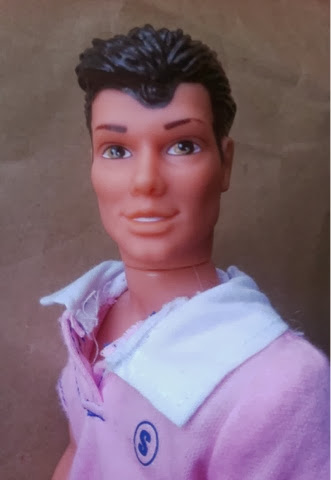 I think I've discovered one of the fundamental rules of blogging:

As soon as you make a post where you applogize for your absence lately and promise to start posting more regularly, your blog will immediately go on hiatus for at least a month. I can't believe I fell for it! (Also, your next post will then be an apology for the unannounced hiatus and has approx. a 50% chance of being the last post on that blog ever. I'm on thin ice here.)

I haven't been in much of a doll mood lately. My interest in this hobby tends to come in waves, and I think might just as well accept that instead of feeling bad for being an inconsistent blogger. Anyway, last week I read this article by an(other) adult collector of Monster High, and suddenly dolls sounded like fun again. I still haven't mastered the Blogger app, so this link probably won't be clickable ETA: now clickable! http://m.xojane.com/issues/im-37-years-old-and-i-collect-monster-high-dolls

So, what's new on the doll front? Well, I was hoping Ever After High would appear here before christmas, but so far I haven't seen a trace of them at any of the big chains. What I have seen is DVD:s of the webisodes though, so the dolls shouldn't be far behind. Seems like a missed opportunity to leave them out of the christmas catalogs, though.

I'm not entirely doll-less, though! I finally got my hands on an older Fashionista Ken. He doesn't have a name yet, but according to Mattel he's Prince Derek from 12 Dancing Princesses. He came in good condition with boots and all his clothes (except for the crown), and his hair still glued down with conditioner. A bit overpriced but still a good thrift store find. It turns out his shoulders are a lot wider than my unarticulated Ken's. I'll have to make some pattern adjustments. Oddly enough, even though their feet and legs are virtually the same size, Derek wears larger shoes and boots much better.

Let's see if I can get these pictures to work:

ETA: putting a cut here in case the pics turned out huge