I went to the toy store yesterday and actually remembered to bring DeeDee's head along, '80s hair and all. Turns out I was wrong about her skintone: she isn't darker than Fashionistas Nikki, just a different, more neutral shade - Nikki looks almost orange by comparison. That's one possible donor struck off the list, then.

It's probably just as well, since DeeDee has a really small head. It's small even compared to other older Barbies - in fact, I'm pretty sure it's even smaller than Diva's (although why I have no idea) and hers is just barely big enough to not look weird on the Fashionista body. I wanted to avoid that with DeeDee, but since AA dolls are pretty scarce here and color matching via online photos and forum advice can be a bit of a lottery, I might have settled for a Nikki body if the match was reasonably good.

Anyway... on my way out I passed the MH aisle, and suddenly thought of Clawdeen - and what do you know, an almost perfect match!


Great, the question is: do I actually want to put DeeDee on a Monster body? I like that it's slightly shorter and smaller, but... arched back? Huge feet? Claw hands? I'm not sure that's the look I had in mind for DeeDee. On the other hand, this could be the final excuse I need to get that Werewolf sisters pack off eBay. I only want Howleen and don't really care for Clawdeen's purple hair - a perfect guillotine victim!

Of course, if I behead Clawdeen and give her body to DeeDee... poor Howleen will be left without a sister, and that's just too sad.
Posted by Anderson's All-Purpose at 3:02:00 PM 6 comments:

Sketching on a blouse for the mystery lady. Something loose and elegant. Not that I need another project, but she's too big for most of my doll clothes and I have this really nice fabric that I've been meaning to do something with for ages.

Cool Kevin is here! - Some kind of review


Well, Cool Kevin arrived a couple of days ago and I've been planning to write something about him. At first I thought of doing a proper review à la Toybox Philosopher, but since Kevin doesn't seem to be available or well known outside Germany/continental Europe (and those who live there are probably familiar with him already) I'm not sure there's really a need. Still, I took a billion photos so I might as well post them. :) Nude male dolls ahead! (Blurry and badly lit, too!)

Cool Kevin and his Articulated Body

Didn't I make some kind of resolution not to buy any more dolls for a while? Hmmmm... nope, doesn't ring any bells. Anyway, I'm keeping the spendings on a moderate level. Apart from the latest thrift store finds, I have a nude first wave Fashionista Ken on the way, although he's taking his sweet time getting here and I'm starting to wonder who to call and yell at for losing my parcel.

In the meantime, I found an interesting alternative while googling possible leads re: Mystery Simba Lady. Meet Cool Kevin, the latest incarnation of Steffi Love's boyfriend:

Simba is a German brand, and from what I've heard Steffi Love doesn't seem to be widely sold in the US. Stores here have Steffi but no articulated Kevins, so I haven't seen him in the plastic, as it were, but from photos (here are a few) he seems to have pretty good articulation for a fashion doll. Elbows, wrists, knees - and hinged ankles, just like the articulated Steffi body. Hopefully the Fashionista Ken will arrive and I'll be able to compare them.


I've found him at a pretty good price online and will probably get one as soon as I can decide which one. I really like the plaid shirt, but I hate the yellow hair, and I do not need another project on my endless list of repaint projects (which is endless mostly since I haven't, you know, actually repainted anything yet). We'll see.

In other news, Mystery Simba Lady is still unidentified. Why didn't I take German in high school??

Looking through the last of my old doll stuff that I brought home when my parents moved, and I'm sitting here giggling at the Barbie clothes kid!me designed and made. It's the haute couture equivalent of crayon cephalopods, in 1/6 scale. Some I remember making on the old treadle sewing machine we had in the attic, some are held together with glue. Nothing looks good, but at least it's entertaining. I should do a photoshoot or something.
Posted by Anderson's All-Purpose at 10:33:00 PM 2 comments:

Email ThisBlogThis!Share to TwitterShare to FacebookShare to Pinterest
Labels: a trip down memory lane, Barbie, sewing

Monday's find turned out to be quite a mystery. No luck with ID'ing her so far. In the meantime I'll post about my other finds.

Yesterday I had to go into town again, and took the chance to have a second look at two Barbies I passed on last time. What makes thrift store shopping so exciting (and frustrating) is you never know what you'll find, and you don't know if it'll still be there when you come back, but yesterday I was in luck. (Warning: terrible photos ahead.) 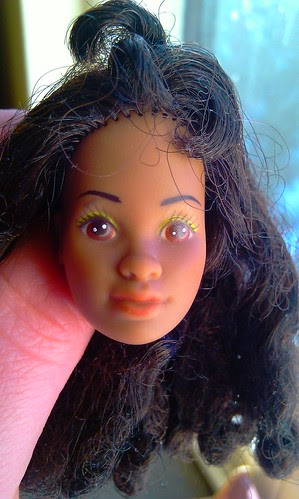 I thought her big hair and lime green eye-shadow seemed familiar, and I was right: she's a second edition Rockers DeeDee from 1986 (known as Rock Stars in Europe). I've had Diva for 25 years so this will be a long awaited reunion. Her face mold is the Spanish Barbie mold from 1983 (inner rim says 1982). She's quite unique, a bit like a mix between the Steffie and Teresa head molds.

Head and hair is in pretty good shape, but the legs are sticky and horrible. Probably just as well nobody bought it for their kid. My new project is hunting down an articulated AA body for her. Unfortunately the only one sold here afaik is Fashionistas Artsy/Nikki, and I'm not sure she's a match. (Yes, I'm bringing DeeDee's disembodied head with me for comparison next time I'm at the mall.)

As we speak I'm about half-way through disentangling the hair - it's in good shape and I'm sure it'll look great when it's finished. I'm using lots of conditioner - some warn against it and recommend fabric softener, some say the opposite. I figure you can't do much harm to a 25 year old doll and go with the one that doesn't require gloves. 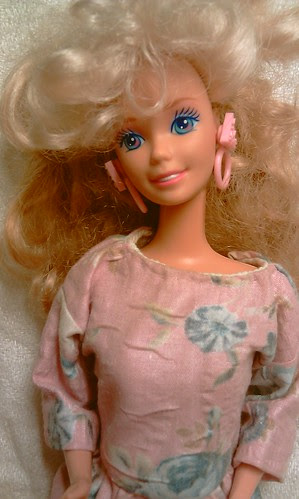 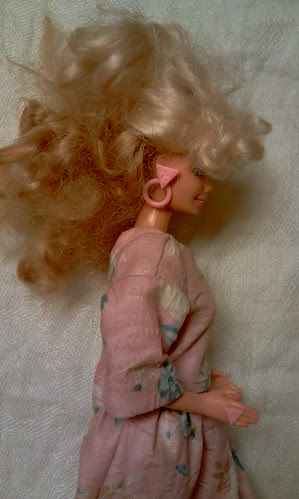 This one still has her original jewellery - just look at it, it's so 90s! The hair looked like it could be fun too. I'm pretty bad at telling hair fibres apart, but at least I'm sure it's not nylon. It's light and fluffy, more dull than shiny and almost wool-like. Well-worn kanekalon? I'll go easy with the hot water to be on the safe side.

I figured googling "barbie earrings pink triangles" would be the easiest way to ID her, but before I even got the chance to do that, I managed to stumble across these photos of a Teresa wearing some very familiar looking earrings. All American Barbie! The home-made dress is pretty cool too, but I still wish I had some stone-washed jeans for her...

The truth is, I'm more or less obsessed with articulated playline bodies.

I remember how frustrating it was trying to make Barbie's stick-straight legs fit under her coffee table. I also remember the bright pink convertible my sister's Barbie drove had lots of leg room. Or rather, lots of empty space into which you had to wriggle the stiff legs before the doll could sit down properly. Good thing that car didn't need an engine. Tables are a whole different thing, though. More than one doll sitting around the table at once? Forget it. Sorry Ken, you'll have to stand.

Breakfast in the Roberts household in the '80s involved more careful logistical planning than in the early, unpatched version of The Sims 1, except at least Barbie wouldn't move around on her own and get stuck between the table and Sindy's empty cornflakes bowl, and then stand there shrugging her shoulders forever until you deleted the wall or something. (I'm sorry, if you've never played The Sims all that probably didn't make much sense.)

What I was trying to say is, I'm really happy there are more and more fashion dolls with articulaton around!

Although I realize articulated bodies of different brands have been around for years before Mattel's Fashionista body, I've been out of touch with the doll hobby for so long that I still feel like they're a rarity. Every time I find one I haven't seen before, my brains goes gotta catch 'em all, gotta catch 'em ALL!!!1 Fortunately, my brain also realizes I don't have a lot of money, which is why I do most of my doll shopping in thrift store. Also, that's where you can make the most unexpected finds. I usually find myself looking for dolls that are as far from the blonde Superstar-faced Barbies I grew up with: an interesting facemold, or an articulated body.

The doll I found yesterday has both.


She came in something nice but ill-fitting. I'm trying to ID her, but no luck so far. The back of the head says Simba (no logotype), the body says MADE IN CHINA and is, as far as I can tell, identical to an old articulated Steffi Love body (good shots of it here) except for the torso, which I guess could be called plus-size (or rather, what passes for plus-size in the world of fashion dolls). I think she would take the same size as Mattel's Rosie O'Donnell. Flat chest, no waist, short neck. As far as I know there are just a few 1/6 scale female dolls with this body type, and here's one I hadn't even heard of! (Another annoying thing with '80s Barbies was trying to make clothes that fit their odd, angular hourglass shape.)


For some reason her face seems really familiar to me, although I can't place it. It's definitely not the usual Steffi mold, that much I can tell. She has a wide nose and more marked folds by her mouth - I wouldn't call them wrinkles, but, you know, fashion dolls - and basically no makeup. The hair is mostly blonde but could pass as gray-ish.

My guess is she is someone's grandma or mum - did Steffi Love ever have family members? All I can find is a Kelly/Shelley clone little sister. I know Simba makes other dolls, but it seems to be mainly Disney characters and cartoony is the last thing this doll is. Possibly a short-lived line of "more realistic" dolls? Or it's a clone, although she seems pretty high quality for a knock-off. Well, the search continues...

Unfortunately, the head has some bad staining. It's faint and not very visible in photos, but you can see it on the eye print. It looks like a kid doodled on it with an orange marker and it didn't wash off completely. Not entirely sure how to deal with that. I've had success with vaseline and a bright windowsill before, but I'm not sure how safe it is. (I know about Twin Pines, I just want to avoid shipping across the globe unless it's absolutely necessary.) Well, that's what Google's for.

I'm really happy with this find: she has articulation, an interesting facemold AND an unusual body shape! Now I just have to find out who she is...

(As usual I took a lot of bad photos and dumped them all on Flickr.)
Posted by Anderson's All-Purpose at 10:10:00 PM 8 comments: