At last: Asha! (Made To Move Barbie)

The other day I was sorting some old pics I'd saved on the hard drive and came across the first one I found of the then-rumored new body with 18 points of articulation that Mattel was claimed to be releasing soon. Well, now it's almost exactly year later, and I finally have my first Made to Move doll in hand! Asha arrived last week, courtesy of a fellow doll collector with access to a timely sale. By now I think you're all familiar with the abilities of the Made To Move body, so I'm not doing a review or anything. But of course there are pics - grainy, pseudo-nude ones.


So far I've only noticed two problems: I wish that her upper arms would come in closer to her body so she could fold her arms properly, and her ankle joints probably shouldn't have passed QC: they're a bit floppy, and while that might be ok in most joints, ankles need to be tighter so they're able to carry the weight of the body without folding. A little floppiness goes a long way to severely diminishing a doll's posing ability. :( Well, luckily it can be fixed. I haven't tried the superglue trick on these kinds of exposed joints before, so I just wrapped a couple of rubber (or rather silicone) bands around them to give them more traction, and it's working so far.


Apart from that she's practically perfect - and practically glue-free! Her head is completely soft and squishy, the only trace is a small hard lump that seems to be hanging on a tuft of hair inside her head and can only be felt if you squish the head practically flat. While this is making me happy, it also makes me mad - because apparently Mattel are perfectly able to make dolls that aren't self-destructing straight out of the box! They just... choose not to??

I don't know, maybe it's time for another petition.

I knew straight away I'd try to get a hold of Asha first, because I was pretty sure she'd never be sold in Sweden (sadly the AA dolls often never make it here) and I didn't have a doll with this mold. I liked her curly hair and that her hairdo was pretty realistic instead of the oceans of hair on some dolls, but apart from that I didn't have much of an opinion on her. But she quickly grew on me and now I'm completely in love with her. <3

Since she can't be wearing that neon yellow top all the time, I made her a blouse. The pattern is the blouse of a clone doll that I took apart and modified slightly. I'm often prone to perfectionism, and something that's helped me is to look at badly made massproduced doll clothes and realize that they look pretty ok, even if they aren't perfect. Hell, the clone doll's skirt is literally coming apart and I still love it.
I found this polka dot fabric scrap for cheap and as usual I've been hesitating to use it, because what if I waste it on something that turns out ugly? Well, my fabric crate is a mess and I couldn't find anything better, so I decided to take the plunge.


I'm pretty happy with how it turned out: pretty ok.

It's still a bit of a mess, mainly since some of my modifications didn't turn out, and the back was mostly... missing, really, from the original blouse, so I had to figure something out and I'm not great at that. 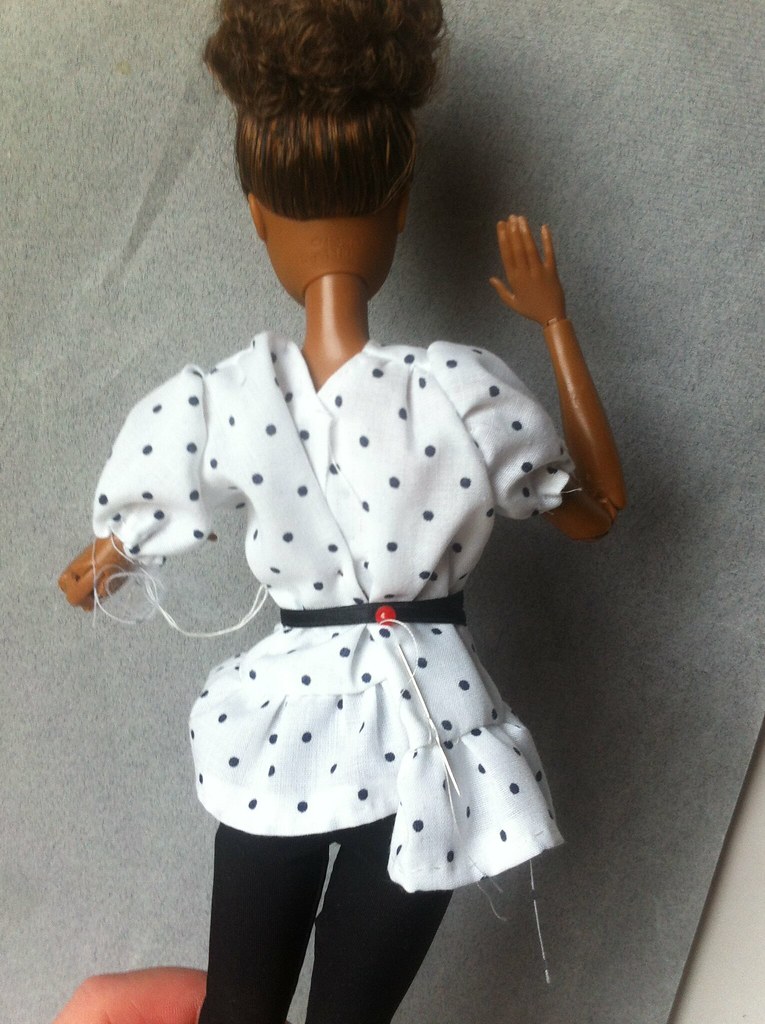 But yeah: it's recognizable as a blouse, looks a bit like something you could buy in a shop, and the pattern is pretty. So I'm happy. Pretty ok. :)

Side not: I always thought of this sculpt as Nichelle, partially due to Mattel's confusing naming practices, but also because it makes the doll look a liiitle bit like she's about to sneeze: slightly wrinkled nose, squinting a bit, mouth open, plus sometimes they give her those angry eyebrows... But the name of the sculpt is actually Asha. But I keep thinking of her as Nichelle. But naming her that would be confusing... I think I'll compromise and call her... Neisha?

Petition for Mattel to actually produce that Gabby Douglas barbie!

I don't know if you've seen the Gabby Douglas Barbie Mattel made? Personally, I don't follow - well, sports, really, but I'm always on the lookout for interesting face sculpts and this doll has one of the best I've seen in ages. Plus there's hardly a surplus of black barbie face molds. Unfortunately, like most of Mattel's Shero dolls, this doll is a OOAK and not actually for sale, even though some of the media blurbs don't make this clear.


It would be a pity to design such a great unique mold just to use it once and then let it gather dust. And I'm pretty sure there's a considerable overlap of little girls who dream of being ballerinas and gymnasts, and little girls who love Barbie (and of parents who want to buy a doll modeled after a great role model). And now we have the Made to Move body that can actually perform all those gymnast moves! (Well. not on her own, obviously, but... you know what I mean.)

Apparently I'm not the only one: there's now a petition for Mattel to actually make this doll, at least in a limited edition. To be honest, I'm not sure how much this could affect their decision - I mean, the headglue petition didn't really do much. But as BlackDollCollecting points out, apparently it worked for getting the Ava DuVernay Shero doll produced, so it might be worth a shot!

Thanks to BlackDollCollecting and Phyllis who posted about this.
Posted by Anderson's All-Purpose at 2:43:00 AM 1 comment: