Since I'm broke and not buying any dolls this month, I thought I'd sew some clothes for the ones I already have instead. I'm to lazy/tired to wite anything tonight, but basically this was supposed to be a simple, medieval/renaissance/1840s?-ish dress suitable for a zombified peasant girl but things got out of hand a bit. Good thing zombies don't care about historical accuracy. 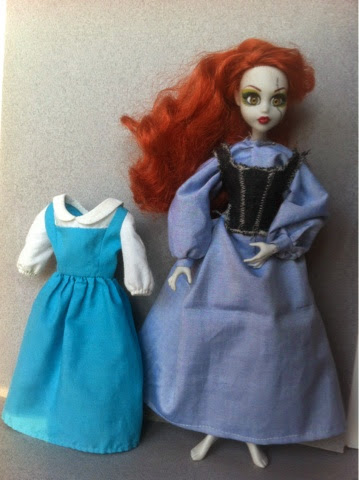 Belle's dress on the left was sort of the inspiration/starting point.

Email ThisBlogThis!Share to TwitterShare to FacebookShare to Pinterest
Labels: belle, once upon a zombie, sewing

Well, this wasn't how I planned it. My Evi Love needed clothes - and shoes! - so I bought a few thrift store Evis to mug for outfits (and when I found a boy version I bought those too, since they were the only ones that had shoes that weren't pink). The plan was to re-donate the nude dolls, but then I started researching (ok, image googling) them and realized they all had different face molds... And if there's anything I collect it's face molds. So all of a sudden I have four of Evi and her friends, and barely enough shoes to go around. That's doll collecting for ya! 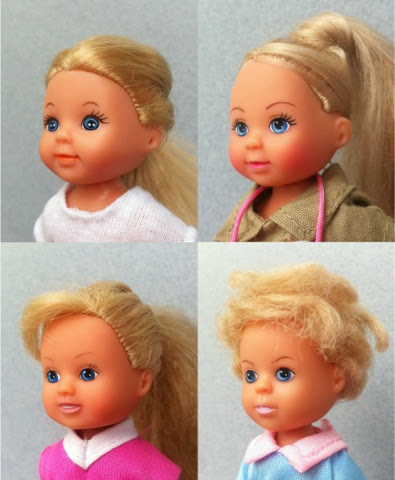 Older, Newer, The Other Girl, Timmy
Here's what I got so far: first there's the older version of the standard Evi face mold with molded and painted eyes. Then there's a newer version of the same mold that's flatter to allow for screened-on eyes. (And both are descendants of the original Evi face mold, which seems to be a clone of the Heart Family kids/Barbie's Li'l Friends.)
Then there's a completely different girl mold that might be a friend? I'm not sure, but I did find out there was an Evi line called Children Of The World that seems to have used both (here's the Japanese girl using the most common Evi mold, and the same doll with the other mold). The boy is called Timmy, and judging from photos his mold seems to have been upgraded for eye screening too lately.
Here they are in profile as well - I find it's often easier to tell face molds part from the side. (These photos aren't perfect, but you get the idea.) 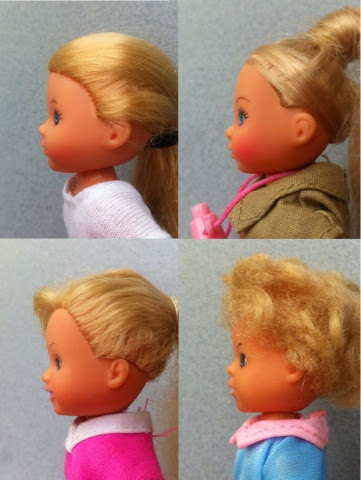 Old, new, pink, blue.
(Oh, and I just realized something - I miscalculated my 100th post anniversary. I went by the number on my dashboard, but I forgot Blogger includes unpublished drafts too... No need to panic though, since according to the new figures, this is my 101th post. Whew!)
Posted by Anderson's All-Purpose at 12:40:00 AM 3 comments: