The instructions on the Liquitex varnish says to wait at least 3 hours before applying a second coat. If we assume that goes for painting on top of it too, and then take into account the limited daylight this time of year and the fact that I can't paint anything after sunset since the lighting is my apartment is so bad, the maximum number of face-up attempst per day is about... one. And that's if I'm not feeling lazy that day (and I usually am). 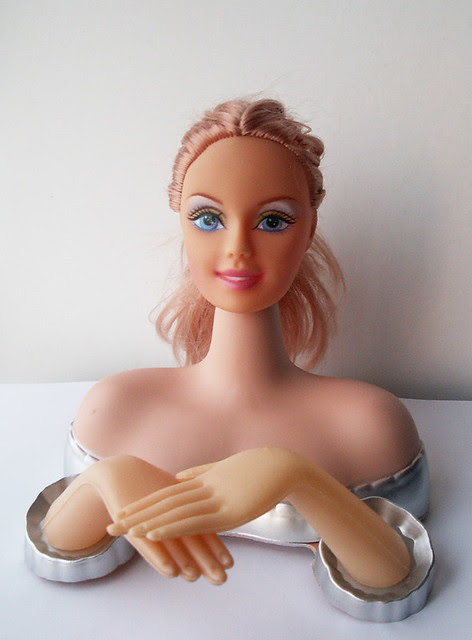 ...or that's what I thought, but now I'm not sure. She already has make-up on, so maybe she's meant for displaying jewelry. The head looks exactly like any Barbie clone, except blown-up. She has that strawberry blonde nylon hair that seems quite popular on clones. I actually like that shade, I should see if any of the doll hair resellers have it.

ETA: I forgot to mention (and I'm not sure you can tell from the pictures) that this thing is quite small: only about 6'' from base to top of the head. 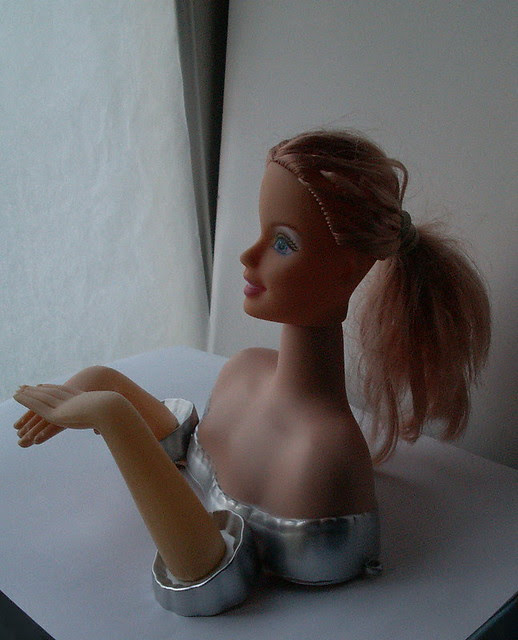 In true clone style, all the parts are different colors and plastic. The shoulder-piece-thing is hard plastic, while the arms are really thin hollow plastic and swivel from the base. I'm not sure what the point is. They're originally the same height, but the base of the left one (her left) is slightly bent. 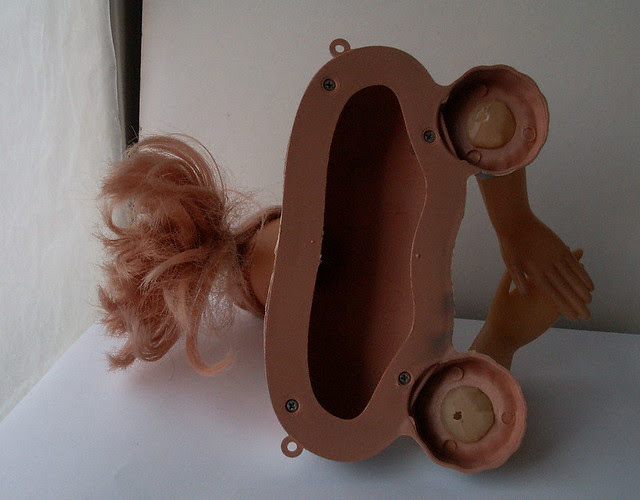 I'm not sure if you can see, but the arms just end in hollow blobs to stop them from falling out of the sockets. It's a very simple construction. I can't help but wonder what those little loops at the bottom are for. Mounting her on the hood of your car? Creating the worlds most bizarre necklace?

This thing was really cheap, and the seller commented on how scary she looks. I told him that's what I liked about her, although when I think about it I probably won't put her in the display cabinet next to my bed. Dolls usually don't have much of an uncanny valley effect on me, but If I woke up in the middle of the night and find her staring at me from behind the glass, I'm not sure I'll be entirely at ease. Doesn't she look a bit like one of those cursed fortune teller machines from horror movies?

The computer crash most likely ate my ever-growing backlog of Doll Pics I've Been Meaning To Post Some Day, and maybe that's for the best. The more photos you have, the less you actually get around to using them, I find, and modern technology doesn't exactly discourage hoarding. Now that I'm stuck with an old and slow computer and a lower-resolution digital camera, I'll have to be more economical. Maybe a good time to be a bit creative IRL instead?

So I finally took a stab at repainting a couple of doll heads. I wiped the Bratz head and one of the surplus Steffi Love heads and covered them with brush-on sealer, just to have something to practice on. Since I don't have a respirator yet, I used ordinary nail polish remover (with aceton) and Liquitex brush-on Matte varnish. Neither is ideal - I discovered the varnish doesn't quite stop the heads from staining, and I have no idea of the long-term effects of the cleaner, but for practice they're fine.

Face-ups are hard. Really hard! I wish I could blame the brushes, or the paint, or the weather or something, but the truth is I just nead practice. A lot. The pics of my first two attempts at the Bratz head were lost in the crash (and thank goodness for that - she looked like a raccoon) but I took a few pics of the latest version, which is me giving up entirely on acrylics and trying out some water color pencils to see if I still knew how to mix colors at all, then trying to put sealer on top of it to see if it really is as impossible as everybody says. I could, and it is! Good to know. She looks a bit spooky, like the death mask of L'Inconnue de la Seine, which isn't exactly what I was going for, but then again you could argue that anything is less scary than the original Bratz look.

I don't have a lot to say about the Steffi, except I should probably have a plan before I start. And try to steady my hand against something. And learn how to use the brush properly to get a better line. And I should probably vacuum this place so I don't get so much dust in the paint. And she looks a bit like one of the girls from ABBA. Okay, that's quite a lot. Even if it isn't particularly good, it's interesting to see how much of a difference a new face-up makes on the same face sculpt!


I used liquid acrylic paint, which is something I've been meaning to try. I'm using a mix of Liquitex Ink!, Schminke Aero Color and Dr. Ph. Martins's Spectralite because that's what happened to be on sale when I visited the art supply store. The consistency is really nice and seems more or less perfect for this. I found the Schminke got lumpy easily and the Spectralite Bright Yellow is a bit too bright for my needs, but most of all I wish I had invested in a few brow hues. I thought I'd be clever and save some money by just getting the basic colors and mix the rest - a good idea in theory, but it's really time-consuming and very hard to be consistent. Some raw umber and burnt sienna is really useful for skin tones, so that's on my shopping list for next month.


Just to keep you updated on my other experiments, I tried some Remove-Zit on some of Cool Kevin's clothes stains. The instructions says to proceed with caution and leave the stuff on for 1-2 days, but I decided I didn't have time to be careful, so I slapped some on and then forgot about it. Probably not a good idea. I left it on for at least three days, and the plastic did not react well. On the other hand, the stains seem to be gone! Maybe I'll try to file it down. I also tried it on the rubbery upper arm of a Mystic Girl Steffi. No damage, and I think the stain got at least a bit better. So at least now I know what not to do, and if I squint I can almost see this as a sign I should buy a brown haired Cool Kevin like I originally wanted.

Email ThisBlogThis!Share to TwitterShare to FacebookShare to Pinterest
Labels: being creative and stuff, face-ups, materials, staining

Who's that clone? It's Sandy!

Looks like I have an ID on the clone dolls: Sandy! Or, one of the Sandys.

Flickr has been weird lately and won't show me the BBcode or HTML for sharing photos, and it's not because people have it disabled: I can't even see the option on my own photos when I'm logged in. Apparently they moved the button to a secret location just to annoy me and make me feel stupid when I stumble upon it by accident in a few weeks or so. But since I'm not entirely sure people have explicitly made sharing available on their pics, I feel a bit weird downloading and sharing them, so you're getting beautiful and fascinating text links instead.

http://www.flickr.com/photos/lilavati112/4463214068/ - this is obviously the same doll as the one I found with the cut-off blonde hair. Also, I would recongnize those shoulders anywhere.


http://www.flickr.com/photos/54076701@N05/8005772326/ - in this photo you can see the makeup better. There's also a link to an article on Sandy dolls on Barbieplanet.ru with photos of different bodies etc. Here's the google translated version for anyone interested to take a guess as to why a cheap hollow clone doll is known as a "pectoral sandpiper" in Russian:
http://translate.google.com/translate?hl=en&sl=ru&tl=en&u=http%3A%2F%2Fbarbieplanet.ru%2Fother-16%2Fsandy-doll

So that looks like a match, at least for the blonde. I haven't found any pics of the bubble cut dolls yet - at first I thought this Japanese Sindy clone (who's also named Sandy) might be it, but this one has different, if similar, headmold, and I'm pretty sure that the blonde and the bubble cut dolls are identical after all. The body is described as slightly bigger than Barbie, and it doesn't look right either. I'm thinking the girls with bubble cuts may just be older versions (or were bubble cuts in at some point during the '80s? I can't remember). There's also the fact that none of my dolls have any markings, and the Barbieplanet article has photos of the markings on different Sandy dolls. I'm not sure what to make of that, actually. Maybe clones of clones?


Come to think of it, the definition of a clone doll seems pretty unclear to me. For example: Barbie started out as a clone of Bild-Lili, then got clones of her own (many of which are listed at this page). Then came Sindy, who doesn't look a bit like Barbie (at least not the early version) but nevertheless probably wouldn't have existed without her - and then there are dolls like Licca and Betty Teen, who clearly borrow their looks from Sindy. And then there are clones of Licca and Betty! Maybe it's a bit like that saying about how a language is just a dialect with an army: once it's a recognizable brand in its own right it graduates from clone to competitor? I don't know, but at least now I'm pretty sure of the origin of the headmold.

Well, it's a big internet to google through. The search continues! (I feel like the host of an old-timey radio show when I write that... :D)
Posted by Anderson's All-Purpose at 1:31:00 AM 2 comments: