This is what I get for not keeping up with dollieh news: the same news, except 6 months later.

I've probably mentioned the Once Upon A Zombie dolls: zombified Disney princesses with huge awkward feet that were neither designed to fit in shoes, nor balance unaided on. Here's my Belle: 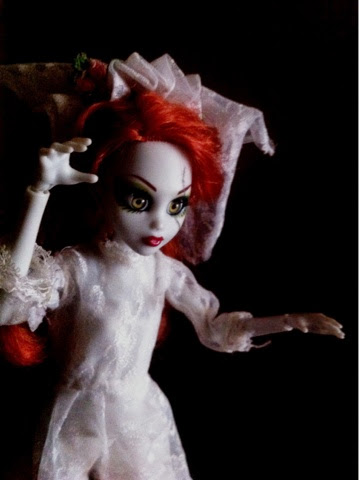 Her original clothes aren't quite as spooky.

There's also a web series a la Monster High, plus some promo art that includes zombified versions of prince Charming and Peter Pan. I'm holding my thumbs that eventually we'll see them as dolls as well, and once in a (zombie) while I'll check their site for news on the subject. There's been none so far, BUT yesterday I found out there's going to be a Zombie Alice in Wonderland! At least they presented a prototype at the NYC Toy Fair (in February!) - you can see her in this video, along with zombie Tinker Bell and zombie Pocahontas:

I'm slightly annoyed I didn't find out until now. But yeah, if she actually comes out she'll probably be on my wish list this Christmas.

Also, if you're in the UK (I'm not): according to the OUAZ dolls are now available in Argos.

Email ThisBlogThis!Share to TwitterShare to FacebookShare to Pinterest
Labels: once upon a zombie, ouaz

Never mind me, just talking about doll stuff... (and dumping some photos).
Fall is here, and that means it's time to dress your dolls in warm clothes and arrange them in a cosy, fall-like diorama! I'm lazy, so I just put mine (or as many as can fit) in the IKEA Huset couch and pretend it's facing a fireplace. 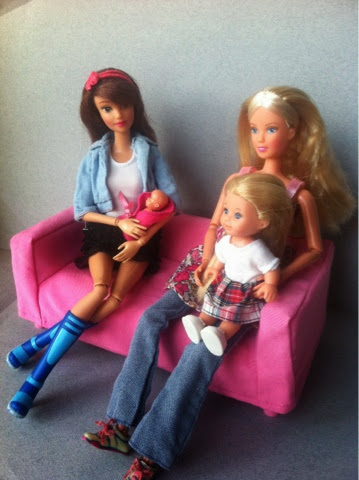 In which case construction paper would be a really bad choice of flooring.
The little doll on the right is Evi Love, little sister (or something?) of Steffi Love. I got her from a friend - unlike Steffi she has a great facemold, perfect for a kid doll. There's a new version now that's more bland, but I still look for them in thrift stores to mug for clothes and shoes. The clothes are usually very simple and kind of ugly - I copied the pattern of one dress and made the one she's wearing here. I tend to get stuck on details when I sew doll clothes, so to combat that I try to make something really quick and simple once in a while. 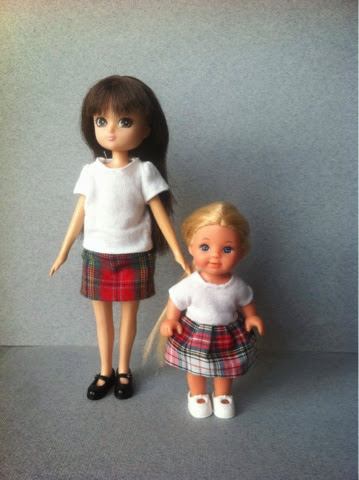 Lottie and Evi
If you squint they almost look like school uniforms - fitting, since it's fall and all!
Also, I decided to give the Super Model Bel body back to DeeDee since it fits her much better than OHC Briana Joy. I'll have to come up with something else for her. 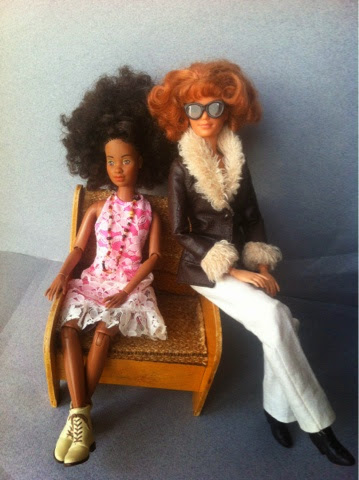 Also, I need to buy a bigger couch.
DeeDee looks a bit cold in that summer dress, but at least she got Momoko's heavy boots.
Speaking of Only Hearts Club - I just discovered that those pink tights from the party dress fashion pack fits my Volks mini guy perfectly! 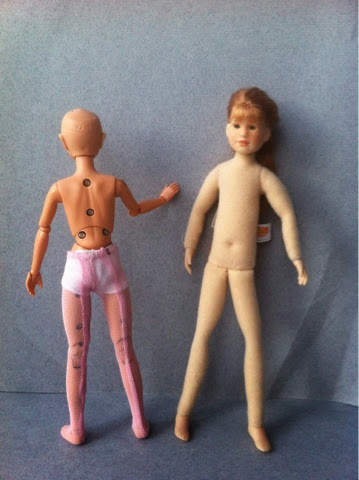 Left: Volks mini with OHC tights, Right: OHC doll
I forgot to take pic, but the dress fits him really well too. Kind of typical, considering this is my only boy doll and the one doll I thought I'd dress in something other than pink dresses for a change. Oh well, it's good news since I'm planning to rebody the OHC doll next to him on a Volks EB-mini A (if I can ever get my hands on one - they seem to be perpetually out of stock) so it's nice to know some OHC clothes will fit. Most of them are a pretty loose fit on the original body and way too big for the Volks kid.
Oh, and I finally had a go at Disney Store Rapunzel's hair: 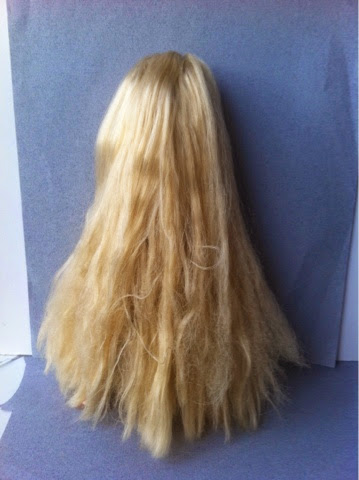 Yes, this is the "after".
Fabric softener, conditioner, hot water... I did manage to get it mostly untangled, but large sections are damaged beyond repair, so I'm not sure recycling it for rerooting would be worth the effort. I also had a closer look at the hip joints and it seem like switching out the legs would be harder than I thought, so maybe I'll just give her a haircut and release her into the wild again. Or I could keep her around as the resident Cousin It.
Posted by Anderson's All-Purpose at 11:59:00 PM 5 comments:

Ah yes, the difficult 101st post.
I'm quickly running out of disk space, so I've started uploading my doll pics to Flickr instead. The downside is that after tagging and organizing them (and writing comments explaining why there are 15 photos of a doll's elbow), I'm no longer in the mood for writing a proper blog post about them as well. :( But on the upside, I'm not dead at least.
Anyway, here's what I've been up to lately, dollwise: 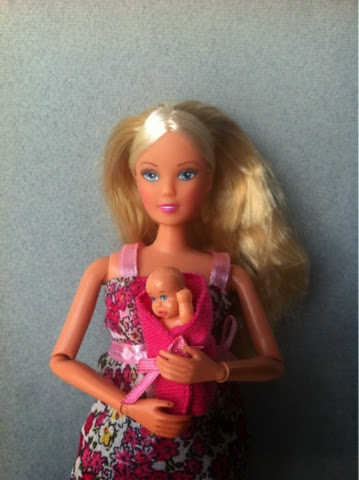 • Upgraded/finished the Steffi Love hybrid!
Since mine was an incomplete thrift store doll I bought a new one to get the baby and the detachable outer belly, plus some clothes that fit. She can hold the baby too! 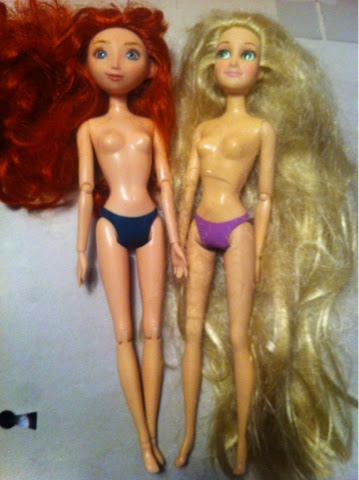 • Found two Disney Store dolls at my local thrift store!
Pretty unexpected, since I'm fairly certain we don't even have Disney Stores here (I guess I'm not the only one who knows about online shopping).
Their face sculpts are pretty bad imo, I only got them for the articulation. Merida is fully jointed! Rapunzel's click-knee legs might be a case for Dr. Frankendolly. 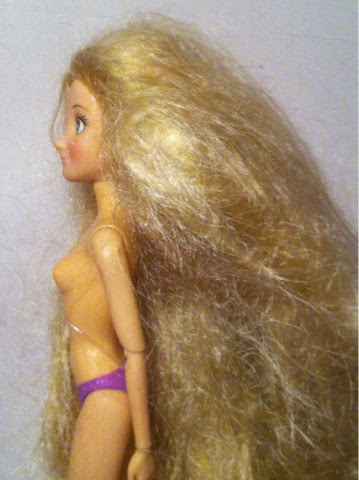 Rapunzel's hair is the worst mess I've ever seen, but it might be salvageable for rerooting. Maybe. To be honest I'm still working up the courage to deal with it. 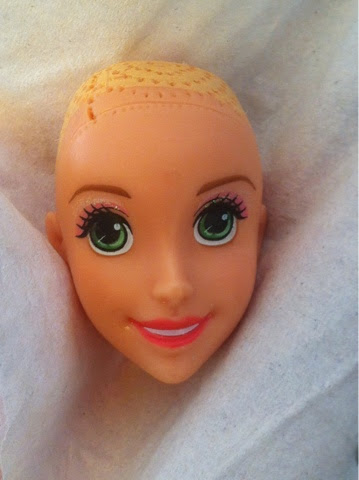 • Stripped Mattel Rapunzel's head!
She was my test subject for The Talcum Powder Temporary Cure for Greasy Hair, but then I decided I couldn't be bothered (note to self: don't test these things on the doll with the MOST hair to comb through). Since her screening was so wonky I decided to just get rid of everything at once. 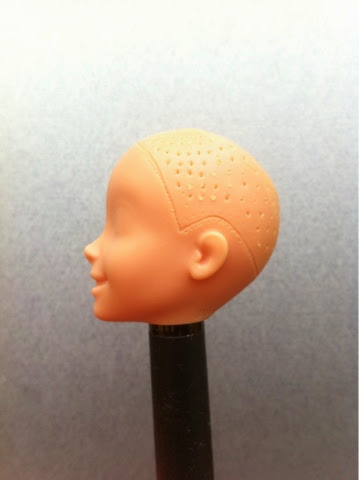 This mold is a lot better than the Disney Store one, but she looks a bit creepy without eyes.
I wanted to make sure all the glue was definitely gone, so I scrubbed the inside of the head with sugar AND steel wool. Hard to tell if it made any difference, but at least it probably didn't hurt. The glue-soaked Nikki I rerooted last time had a pretty sticky scalp even after I washed it, so to be on the safe side I gave rapunzel's scalp a sugar scrub too. I don't know if it was sticky before, but at least it isn't now! 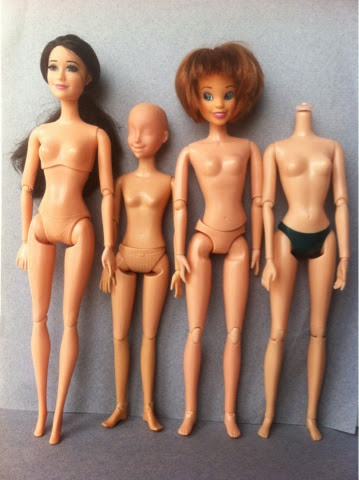 L-R: Raquelle, Rapunzel on Simba super model, Liv Katie, Disney Store Merida (from above)
This is one head I'd really like to have on a shorter body (the original was ~25cm), but she's too pink for Simba's Super Models and not pale enough for Obitsu. For full-sized bodies someone suggested Raquelle/Midge, and it looks like Liv Katie might be an acceptable match too. 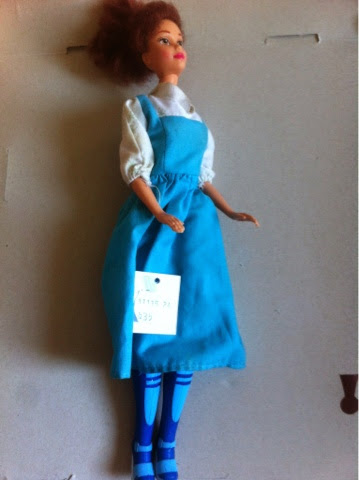 • New doll: Mattel Belle!
Probably my favorite thrift store find in a while. Belle from Beauty and the Beast, by Mattel. Not exactly sure which version, but she came in an original dress (stained and missing the apron). As you can see she was also wearing a pair of boots that looked like they belonged in a sci-fi anime rather than medieval France, but at least the colors matched.
(Fun fact: that price tag on her dress has three stickers on top of each other with three different prices. Lately I've come to the conclusion that thrift store pricing is completely random and mostly up to the individual employee, and this only confirms my suspicions. And no, the last price wasn't the lowest. :( ) 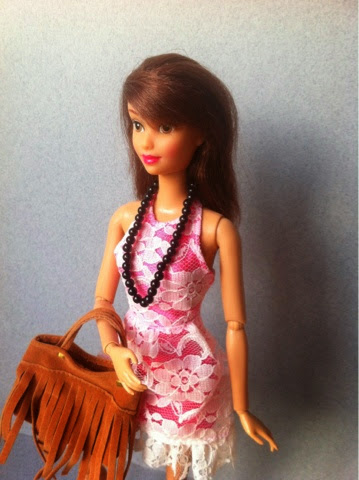 Her hair was pretty frizzy, but luckily all it needed was a boil perm (it looks like kanekalon, so I'll have to be careful if I do it again). The bangs were a bit trickier - the hot water removed the frizz, but also all the volume, and I had no idea what to do with them. Finally I tried combing them flat to one side, and that turned out a lot better than I could have hoped for.
Then I put her on a Fashionista body and gave her all of Style Teresa's stuff (did I mention she's my favorite?). 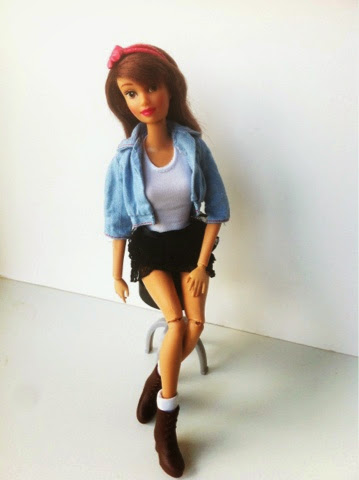 I also seem to recall renaming her, but I've forgotten what. Nina? I should write this stuff down.
Posted by Anderson's All-Purpose at 7:07:00 PM 13 comments: